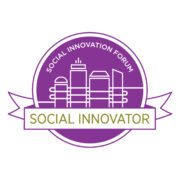 Julie’s was chosen as a 2017 Social Innovator for “Addressing the Disadvantages of Poverty and Adversity in Early Childhood.” The award was announced at the Social Innovation Forum’s 13th Annual Winter Reception on December 7th, 2016.

What do you think of our new logo? Special thanks to Boston University’s PRLab and to Opus Design for their pro bono work.

Our fourth annual Friendraiser was held on 9/29/16 – 175 people were in attendance to celebrate and support Julie’s!  South Boston Online covered our event.

We were the proud recipients of the Liberty Mutual 2015-2016 Education Initiative Grant for 100 outstanding organizations nationwide dedicated to promoting educational opportunity.

Sr. Jean and Sr. Louise were recently recognized as “Greater Bostonians” on WGBH’s Greater Boston with Jim Braude for their decades of commitment to the families of Greater Boston.  What an honor to their legacy!

On May 14, 2015, we held an event at Venezia to honor our co-founders, Sister Jean Sullivan, SND, and Sister Louise Kearns, SND, for their service and dedication to women of greater Boston for over 50 years.  The women have lived their lives among the poor, aiding mothers and children per the mission of the Sisters of Notre Dame (SND.)  In the 1970’s both were living and working in the D Street Housing project in South Boston and witnessed firsthand the everyday struggles of women, particularly single mothers and their children.  The two women came together in 1974 to collaborate in the founding of Julie’s Family Learning Program as a way of providing care, education, and support to women and children of Boston.  200 families in this fiscal year come to Julie’s from South Boston, Dorchester, Jamaica Plain, Mattapan, Charlestown, East Boston, Chelsea, Cambridge, Braintree, Waltham and Danvers.  Families that travel from outside of Greater Boston may have been transferred out of Boston due to the shelter system, but continue to remain at Julie’s.

On May 14, 300 people attended this event to celebrate the lifework of Sr. Jean Sullivan, SND, and Sr. Louise Kearns, SND.  This “Honoring Event” was the biggest event of Julie’s history.  Speakers were Sr. Patricia O’Malley who began Julie’s Children’s House with Sr. Jean in the 1970’s.  Author Michael Patrick MacDonald also spoke about Julie’s influence in the community.   A video was shown chronicling the stories of women and children in the program.  Alumna Lauretta Brennan gave the keynote speech, telling her inspirational story.  And Sen. Linda Dorcena Forry followed, speaking of the challenges all parents face “educate a mother and you’ll educate a generation.”  Julie’s angel awards were given to Srs. Jean and Louise by staff members Ann D’Auria and Christine Griffin.

Our Director of Children’s Services was May 2014’s Character of the Month.

Our Executive Director was May 2013’s Character of the Month