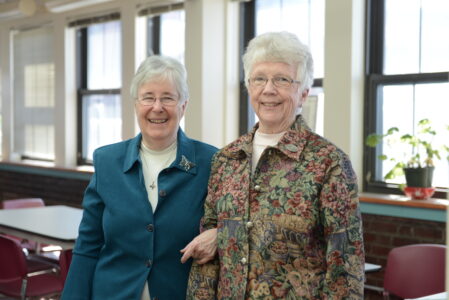 Sister Louise Kearns, SND, joined the Sisters of Notre Dame de Namur in 1959. She received a B.A. in Education and Biology from Emmanuel College and later earned a Masters in education and counseling from Antioch College. In 1969, Sr. Louise moved into the D Street Housing Project in South Boston, where she taught junior high school students, and began a summer youth program. While working in the projects, she became increasingly aware of the immense challenges facing poor families headed by single mothers.

Her experiences lead her to finally establish an Adult Learning Program in 1979 in the community.  The program provided the mothers with educational services and peer support, while their young children received quality day care. The following year, Sister Louise joined hands with Sr. Jean Sullivan to create Julie’s Family Learning Program.

Sister Jean Sullivan, SND, joined the Sisters of Notre Dame de Namur in 1957. Upon completing her Bachelor of Arts degree at Emmanuel College, she began teaching first grade in communities throughout Massachusetts. During her summer months, she worked with migrants in New Jersey and Delaware. While working with migrant families, she encountered many children who had poor self-esteem and little self-confidence. Sr. Jean began searching for educational approaches that would best help these young children, and ultimately settled on the Montessori method as the most effective. She earned her certification as a Montessori teacher from Cornell University.

Sister Jean specifically chose the Montessori method for creating and encouraging self esteem building among lower income children. Dr. Maria Montessori, born in 1870, was the first woman to receive a medical degree in Italy. She worked in the fields of psychiatry, education, and anthropology.  Trained in science and medicine, Maria Montessori used her skillful powers of observation to analyze young children’s most natural and effective learning strategies that she found rooted in a series of sensitive periods (birth to six years). To enhance these early learning periods, she then designed an ingenious series of hands-on education materials, reproductions of which are still used in Montessori classrooms on every continent. More important than her materials, however, is Maria Montessori’s philosophy that enables both teacher and parent to have a comfortable and fruitful relationship with youngsters. Basic to all her efforts for reform is her conviction that civilization can be saved by children who are respected as individuals, nourished by caring adults, and educated for peace.

In 1974 Sr. Jean joined with Sr. Pat O’Malley to establish Julie’s Children’s House. The program was unique in that it not only offered a Montessori education to low-income children, it also provided their mothers with monthly home visits and educational sessions on parenting. In 1980 Sister Jean and Sr. Louise Kearns decided to jointly create what is now Julie’s Family Learning Program.

Sisters Jean and Louise named Julie’s after St. Julie Billiart, foundress of their order, The Sisters of Notre Dame de Namur.  St. Julie’s vision was the development of a community of women who through simple and prayerful lives commit themselves to educating and serving others, especially those who are poor and marginalized.  Their mission is simply to live and work with the poor.  In 1849, three sisters came to Boston. Within days, they were teaching at St. Mary’s in the North End, at that time the only Catholic school in Boston. From Boston the congregation continued to grow and headed north, south, and west of the city. They settled first in large mill cities, then later in less settled but equally needy places. In 1919, Emmanuel College, the first Catholic college for women in New England, was established in Boston. From their foundation, the Sisters of Notre Dame Namur have always had a particular care for the education of women and girls.  In 2004, the Sisters of Notre Dame de Namur celebrated 200 years. Today more than 625 Sisters of Notre Dame continue to live and work in New England. Sisters from New England also continue to serve in Africa, Latin, Asia, and Europe.